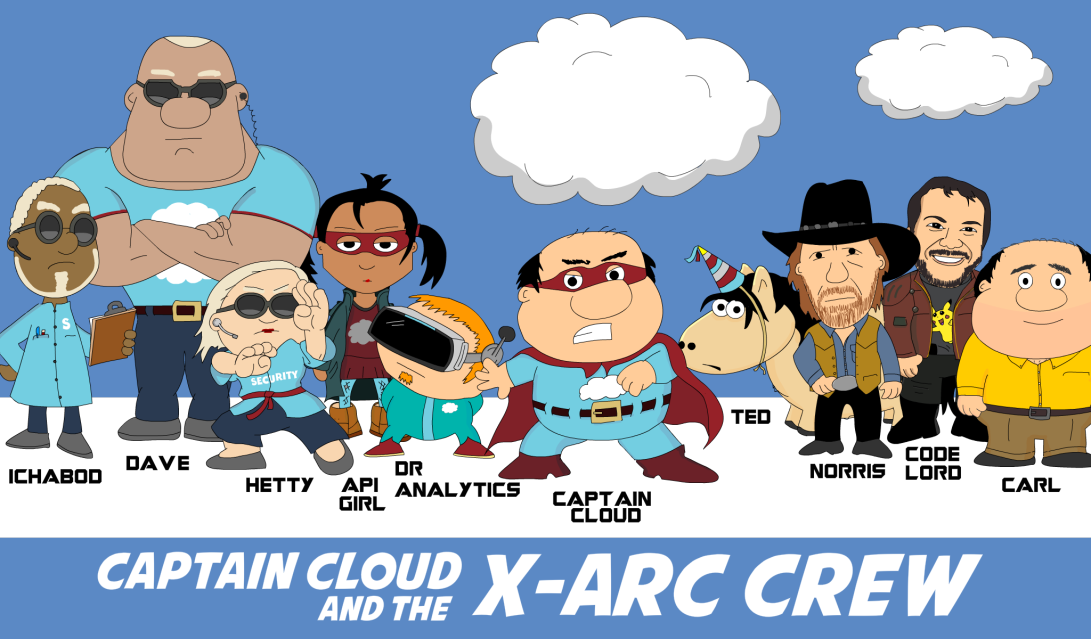 Cloud requires many disciplines and the Captain has been steadily building a team to make the transition to Cloud as painless as possible. Cloud is truly Cross Architecture now (X-Arch.. see what I did there?) involving teams like Enterprise, Collaboration and Security, in addition to DevOps and the infrastructure silos that still exist.

The Captain knows more about Cloud than you can wave a stick at.  He will fix the most cloudy conundrums and get you where you need to be. He may be middle aged, balding and sporting a dad bod, but don’t let that fool you. He is agile, flexible and native. He once arm wrestled his nemesis “The Shadow” for 23 minutes non stop. They called it draw as the Captain had a 4 o’clock conference call.

Cloud is no good if it’s not secure. People would be getting up to all sorts of funny business. So you need SECURITY, and you need more than just firewalls. Big Dave is a security brute. He is the doorman. If your name’s not on the list you’re not coming in. Don’t mess with Big Dave. Hetty, is all about agile security. She understands the apps, inspects your APIs and secures the users and data. Ichabod is brains of the outfit. He will learns all the data flows, how they align with your policies, expected behaviour and ensures that no-one is up to no good.

Hand in Hand with Security is Analytics. Dr Analytics went to University with Ichabod. They are both super geeks and were bullied without mercy. But look where they are now. Having a brain the size of a planet pays pretty well.  Who needs girlfriend!! Dr Analytics sees everything. Every flow on the network, every packet sent from any host. He knows the applications and their dependencies. With that visibility you can do loads of cool stuff. Moving to cloud, the Doctor can map all your apps for you in real time. Nefarious activity? Dr A will spot it immediately and block it. He is also a time traveller. He can rewind and tell you what happened a year ago or fast forward and give you some what-if models. You may want to thump Dr Analytics when you meet him, but you really can’t do without him if you are serious about cloud.

API Girl. Beautiful, mysterious, grungy, scowling, alt type. She tends to listen to Evanescence and generally appears to hate the world.  But nothing could be farther from the truth. Despite her appearance she is pretty standard, a great communicator and will get things talking and working together.

Teddy the Disappointing Unicorn. He is actually a Shetland Pony with a party hat. He can’t remove it as he can’t undo knots due to having hooves. Some call him DONKEYCORN which is actually quite insulting as he is not a Donkey.  In fact Donkey’s and Shetland Ponies hate each other. Lots of bad blood there! Teddy doesn’t do much really, but represents innovation. He is Unicorn 1.0. Unicorn 2.0 will probably be much better, and Teddy will be “retired”.

Norris is responsible for Collaboration. Telephony, Instant Messaging, Video and Smart Boards…. You may think he looks like a 70’s/80s actions hero, but any resemblance is just a coincidence. Yes, Norris knows martial arts, knows his way around an M4 Machine Gun. Yes, he once fought Bruce Lee from the IoT team, to the death, mano-a-mano. But, these days he is all about Collaboration, and all that Collab stuff happens in the Cloud. Where else would you do it? No one really questions Norris anyway.

So.. Code Lord. He is not really Code Lord. That’s his twitter handle. He has 223 followers. What he lacks in social media appeal he makes up with his coding ability. Not just building apps though, but programming against infrastructure like clouds, SDNs and container platforms. Full stack and such. If Chris Pratt worked in IT he would do this job. It’s a big of rock star role. Infrastructure as code. It’s the future! (Like garlic Bread)

Finally, there is Carl. Now lets get one thing straight. Carl is not Captain Cloud! He is no Clark Kent or Bruce Wayne. He is an IT guy, trying to figure out this new ever changing landscape. He struggles a bit, but with help from the crew above he will no doubt find his way. Ok, he and the Captain have never been seen in the same room together, and, ok.. I admit there is a passing resemblance.